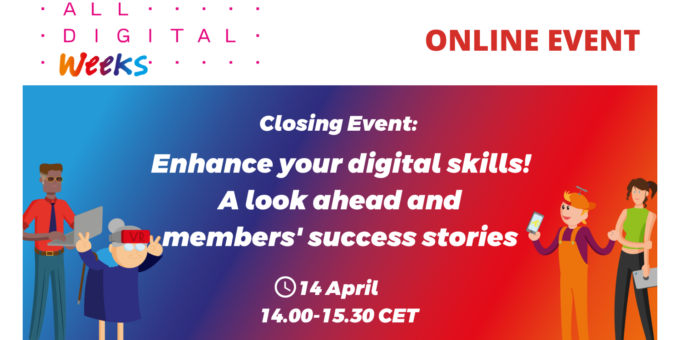 On April 14th, the last webinar organized by ALL DIGITAL was held to conclude these five weeks of ALL DIGITAL Weeks 2022.

The closing event was opened by Peter Palvolgyi, CEO of ALL DIGITAL, who presented a summary of the ALLL DIGITAL Weeks Campaign, highlighting events and support from corporate and strategic partners. He reinforced each week’s thematic focus by thanking guests for their contributions and drawing conclusions from presentations. He then handed over to Norman Röhner, Policy Officer at ALL DIGTAL, for a panel discussion.

Norman began by welcoming the speakers, expressing regret about not all invited speakers having been able to attend the event. He introduced Ciaran Conlon, Director for European Government Affairs at Microsoft, asking him what was there to come for digital competence development in the near future. Ciaran began by stressing his organisation’s appreciation of the Weeks campaign. He underlined that the future is defined by uncertainty, which enhances the importance of discussions and collaborations in the sector. He referenced Russia’s invasion of Ukraine as a defining event having caused considerable changes virtually overnight. He emphasised that challenges and issues in the digital world are similar, and connected, to those in the non-digital world. He named three broad areas as key factors for the future of digital: personal safety, the security and robustness of institutions and systems, and equality of opportunity, participation, and inclusion.

Next, Norman gave the floor to Martina di Ridolfi, Program Officer for Digitalisation at ETUCE, by putting into focus the role of teachers and educators as a stakeholder group in the implementation of digital competence provision. She framed her intervention by stating that normally, her representation of teachers in early childhood education, higher education and vocational education and training is focussed on formal education settings. Yet, over the course of the last two years demands for teachers to deliver digital education have received a new poignancy and shown the need for adequate digital skills among teachers themselves. She used the iSpeed project to present findings on the realities of digital skills for teachers. While 90% of teacher are aware of digital skills, but only 51% felt prepared to deliver digital education and blended teaching. The study also showed that initial teacher training programmes are out of date and don’t meet the needs in terms of a digital world. She also stressed continuing training was insufficient, and that in the context of formal education, digital skills can’t be viewed in isolation, but are closely linked to pedagogies, a point that is still mostly missing in teacher training curricula. She proceeded to illustrate the role of a supportive environment and digital infrastructure, which shows high differences between countries, and within countries between urban and rural areas. 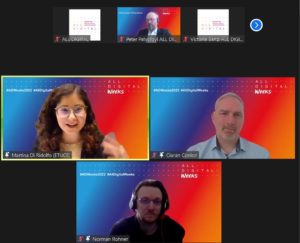 After Martina concluded, Ciaran added that especially the last two years showed how unpredictable the future can be, and that in the course of a few months developments n digital education have progressed 10 years’ worth of reform. He highlighted the concept of security online as a particularly important factor, and the need to create safe online systems., as many current public systems are not equipped to provide safe environments.

Martina then pointed to two further case studies ETUCE conducted in Denmark and Romania and proceeded to ask Ciaran if his organisation experienced a lot of collaboration from the public sector in terms of cybersecurity, to which he replied that there has been a notable improvement in the last two years, but that a lot of governmental structures haven’t adapted to 21st century developments. Martina concluded the panel discussion by highlighting the need to raise awareness among teachers and students of their rights and the risks in digital spaces, as well as the need for further collaboration among stakeholders. Norman then listed some of the policy initiatives expected in the coming months before closing the first part of the event.

During the second part of the closing event, Nenja Wolbers, ALL DIGITAL Deputy Chair of the Board and Stiftung Digital Chancen Project Manager, moderated the session and remembered her first ALL DIGITAL Weeks experience in 2013 when the use of tablets and touch screens was not so developed, and she helped participants who needed to use these ‘’new’’ technologies. Already since then she understood the importance of supporting and encouraging people to use these devices, and promoting digital inclusion. She then gave the floor to five ALL DIGITAL members who actively participated in the ALL DIGITAL weeks 2022 and shared their experiences, providing concrete data to make understand how much effort they put in the campaign and the level of interest raised in their countries. 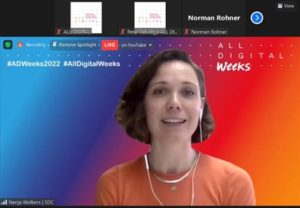 Mara Jakobsone, LIKTA Vice President, presented the activities carried out in Latvia in the framework of the campaign and how they turned into a success story, in enhancing digital skills across the country. She explained how the first days of ALL DIGITAL weeks were mostly focused on digital strategies and policies and in understanding how to implement them. Later in the campaign they focused on online services, critical thinking, cybersecurity and digital development. She concluded pointing out the importance of recording these meetings and uploading them on the internet so that they can be accessible to everyone and reach more easily end users and stakeholders. 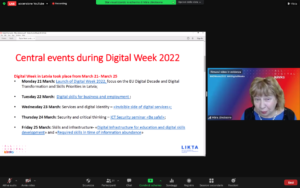 We then learnt about the Slovenian experience thanks to Brigita Dane who is part of the Simbioza team. She told how they managed to organize workshops for an older age target, their main target, not only online but also in person despite the situation that arose due to COVID. She especially wanted to focus on one of the projects they carried out called Girls to Code.

Then Spaska Tarandova, Executive Director of Global Libraries Bulgaria Foundation explained that in 2022, again due to the pandemic, the libraries continued experiencing difficulties. Despite this many events were organized in various regions of Bulgaria during the 5 weeks. One of the main topics was disinformation, more specifically how to recognize fake news from real ones. As Spaska Tarandova stressed, her organisation  also worked to ensure that Ukrainian refugees in Bulgaria could be able to integrate themselves through the projects and workshops organized during the weeks. 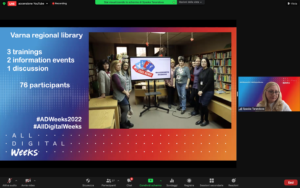 Rita Šukytė, project manager at the Langas į ateitį association and coordinator of the campaign in Lithuania. She wanted to focus on the week of safer internet which was not only one of the main topics for the weeks but also a European campaign. She explained the importance of this type of campaigns to attract more and more people to participate, in particular mentioned the relevance of partners and stakeholders because partnerships are the key to success in these types of initiatives. 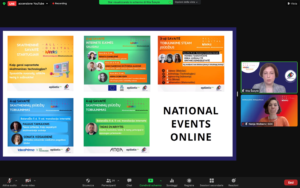 The last presentation came from Spain, thanks to the contribution of Gema Parrado Leon, project coordinator in charge of the planning and management of the activities inside the campaign from the digital competence program of Extremadura. AUPEX managed to organize over 120 events with the common goal of creating a society well prepared to face digital transformation, focusing mostly on activities related to fighting misinformation, media literacy, tackling the gender gap and promoting STEM and sci-tech careers amongst women, or raising awareness on the DigComp framework.

ALL DIGITAL also shared its experience during the 5 weeks thanks to the presentation by Andrea Bedorin, Senior Communication Officer at ALL DIGITAL. He explained the goal of the campaign which was to increase the awareness on digital skills thanks to the organisation of webinars, meetings, trainings and conferences on the topic. He showed the map of events which this year encompassed more than 600 events were organized by members, partners, stakeholders and local organisations across Europe, and consequently the many participants who took part in the campaign. 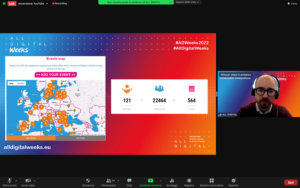