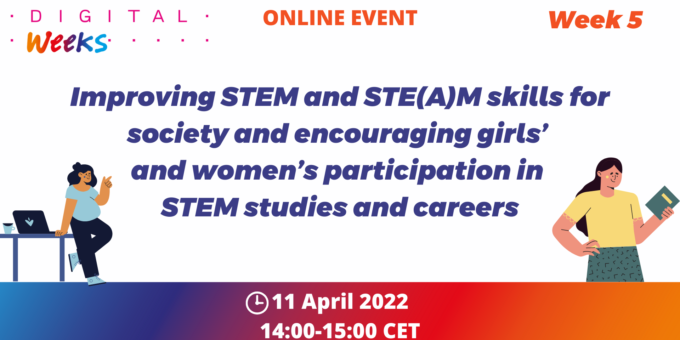 The week 5 Launch Event, ‘’Improving STEM and STE(A)M skills for society and encouraging girls’ and women’s participation in STEM studies and careers’’, took place on Monday 11 April 2022 online with tackling the urgent topic of gender equality within the professional and academic environment. 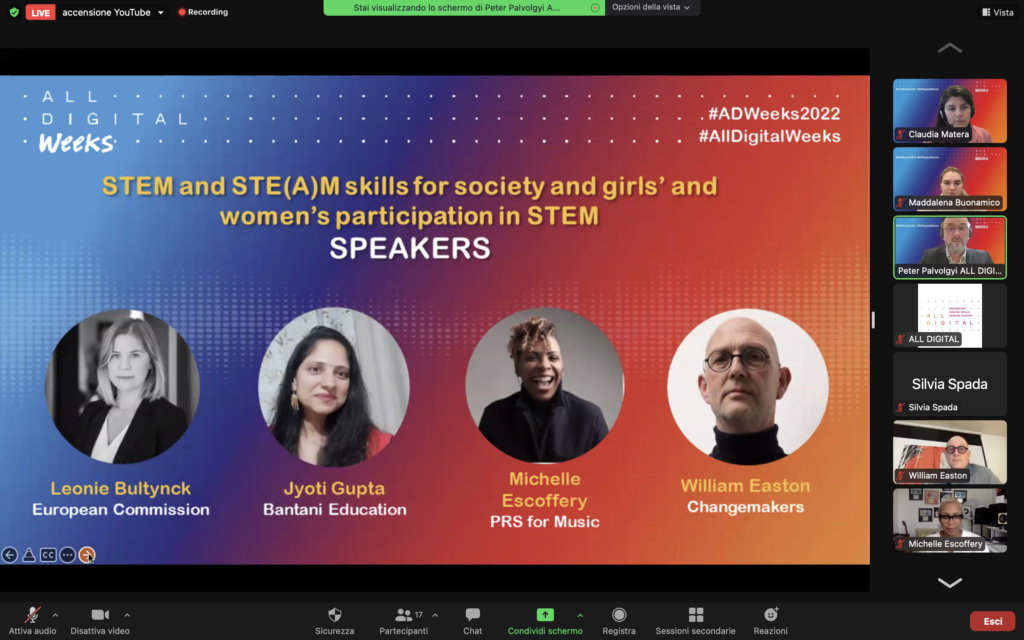 Then, Claudia Matera, Chief Development Officer and Deputy CEO at ALL DIGITAL, took the floor as moderator of the event. She presented the speakers and introduced the discussion, showing first the meaning of STEM studies and carriers and then the necessity to find a gender balance in the STEM fields. 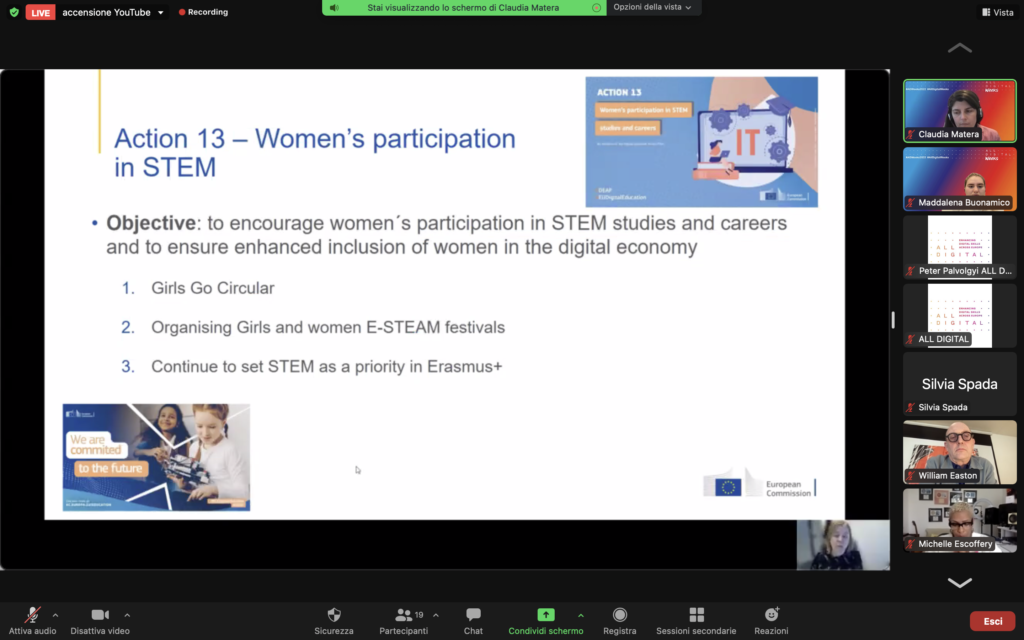 Leonie Bultynck, Policy Assistant in DG EAC, European Commission, responsible for Action 13: enhancing women participation in STEM, set the scene throughout data and statistics. First of all, she presented figures stressing how, in terms of academic performance, girls and boys perform perfectly equally there is no gender performance gap. However, later on when girls get older and start choosing careers and studies, they are dropping off. Today, only one in three STEM graduates is female, while only 22% of ICT graduates is female, and this translates also into the labour market where only 19% of tech sector jobs are held by females. She said that ‘’this (phenomenon) is what we call the leaky pipeline’’. There are many barriers to women in STEM: the idea of a confidence gap, gender stereotypes, and the lack of role models.  Studies show that girls and boys between 16 and 24 have high level of skills to use technologies but the difference lies in their confidence: boys feel comfortable about using the devices they are less familiar with but there are less girls that affirm the same. When it comes to gender stereotypes, some study fields are usually culturally on average seen as a as a masculine field. It’s a larger cultural systemic issue, but it has real life consequences. There is also, of course, a lack of role models and often women and girls in STEM are not visible enough or are not shown as innovators in these fields.

She then highlighted how ‘’Europe is facing an incredible skills gap. Many companies, over 60% actually, report a need for specific advanced digital skills profiles that they just cannot find on the labour market. So having more women there would actually help to reduce that skills gap and overcome that obstacle for innovation and economic growth. If we want to go to an inclusive digital transition, which the commission is putting forward as an absolute priority, then we need more women at the table. It’s just the fair thing to do.’’

She described the policy context, initiatives and actions undertaken by the European Commission and in particular women’s participation in STEM, falling under action 13 of the DEAP. She then focused on the Commission strategic objective to enhance women’s participation in STEM studies and careers. Action 13 wants to ensure inclusion of women in the digital economy, and it wants to do that in three separate ways: one is ‘’Girls Go Circular’’, another is organizing girls and women E-STEAM festivals, and through a more transversal action, the inclusion of STEM as a priority in the annual work of the Erasmus+ program, with the aim to include a very clear gender dimension in 2023. 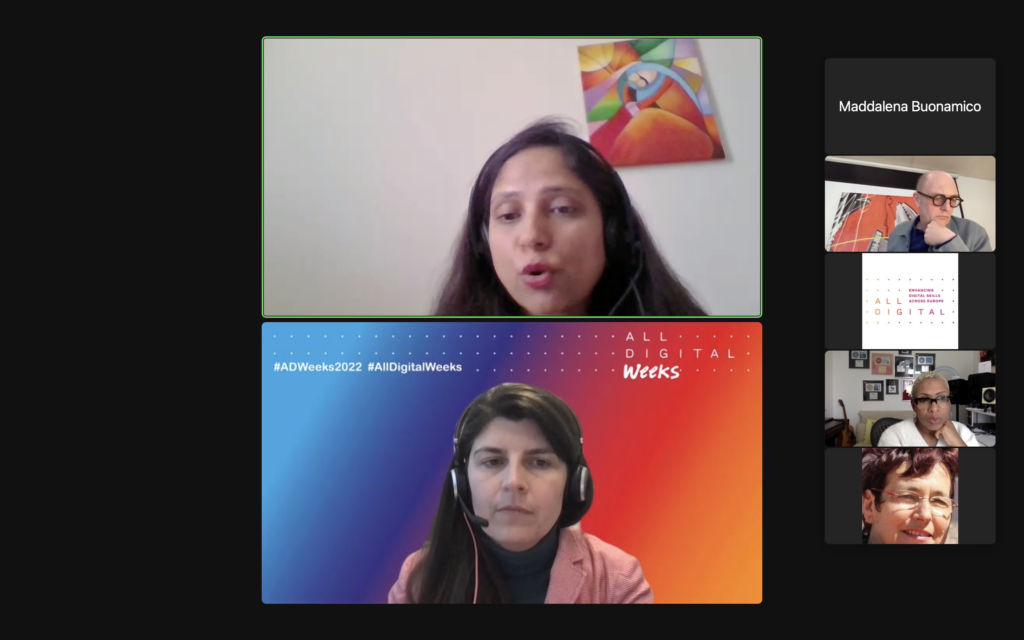 Jyoti Gupta, Operations and Finance Lead at Bantani Education, focused on the gender balance in entrepreneurship: in her own words “If we look at the statistics, we see there is quite an under representation of women in the field of entrepreneurships”, which means women are afraid or find more difficult to be self-employed, due to several social and economical “invisible barriers” (see unequal sharing of household and care responsibilities, or funding companies), even if they have knowledge and skills to set up their own business. She presented numbers and, in particular, she pointed out that ‘’If you look at the startup founders, you will see that only 14.8% of the startup founders are women. If you talk about the capital investments, you will find that 93% of the capital invest invested in the European companies in 2019 went to all male startup companies. So, this is evidence that the woman entrepreneurs are missing out funding all over the world.’’ For this reason, international programs and organizations, such as Bantani Education, are trying to help women to break the barriers built in the system: it is imperative that more focus is placed on helping women entrepreneurs and business owners to build high growth companies. In details, Bantani has seen a lot of interest in key competence development overall on the Entrecomp, which has showed and highlight the practical competencies women and girls need to flourish as entrepreneurs. 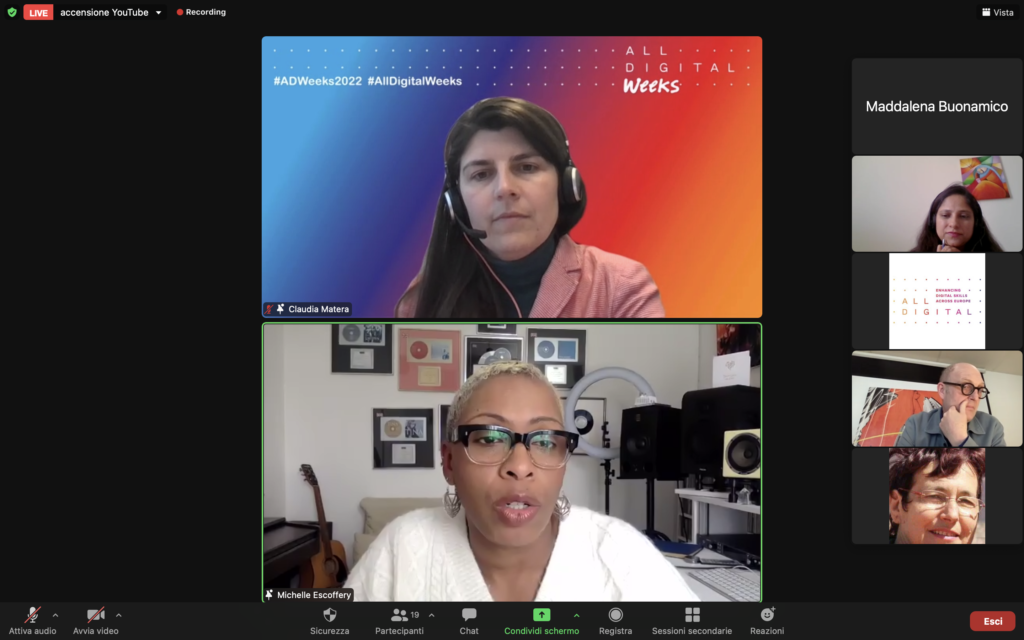 Michelle Escoffery, President of the PRS Members’ Council, dedicated few words to women in music, concentrating on the small number of female producers in studios, song writers, female sound engineers, and board directors. She added, “There is some good news in terms of processing for PRS. Our staff split is looking pretty good in our transformation team: there are 13 women out of 24 colleagues. This means that there’s 54% of women on the team”. This little transformation is a great progress for gender equality and for women representation in leadership and entrepreneurship, but Mrs Escoffery underlined the need to keep on working to improve women’s positions and inspire new generations. Another relevant aspect is the need of recognizing women’s role and Michelle Escoffery underlined the necessity to recognize women’s talent and educate women “to know that they can go for those roles, they can go for the funding, they can go for those seats at the table and celebrating when they get there as well”. Self-confidence and empowerment should go hand in hand for increase female leadership presence. 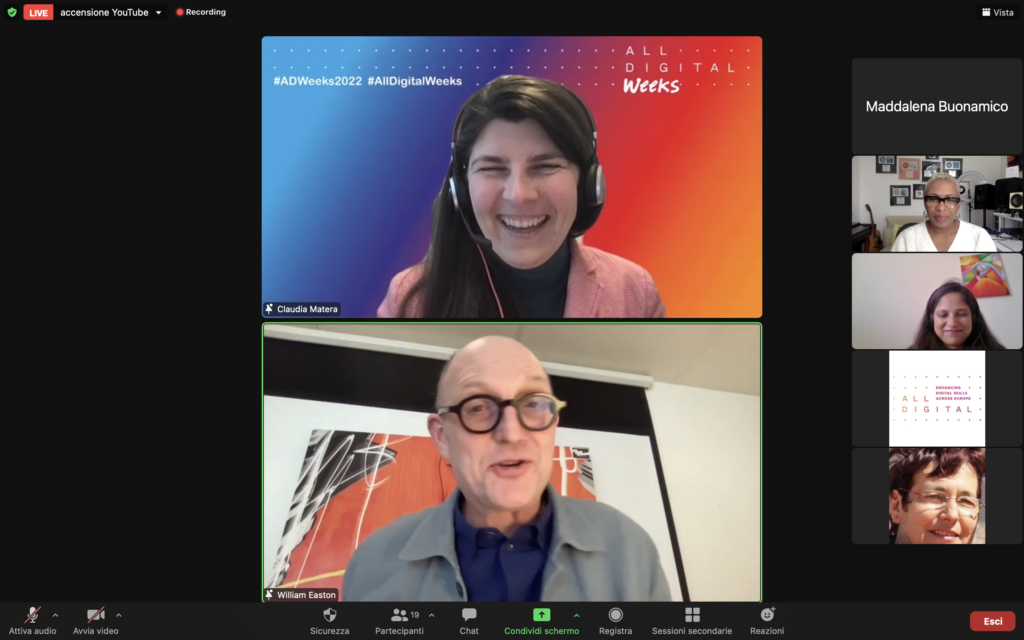 Lastly, William Easton, Head of Futuregames, Changemakers, presented the role played by women in the videogames industry. He pointed out that the biggest difficulty for women is to get confidence in their own talent and skills. So, his team is working to strengthen this confidence, to make girls aware of their power and the contribute they can give. Mr. Easton presented the situation in Sweden: the stats that just came out recently marked 21.4% is the number of women working in the games industry in Sweden, which is 27% of new recruits, although within education the number of women graduated is around the 34%. But it still has not increased since last year, is roughly at the same level, and also we’re not seeing the effects“we’re generating within education” in the industry. Indeed, he said “90% of my students get employed within six months of graduation and most of my students get applied while before they’ve graduated.” Diversity and inequality emerge: this is the Nordic gender equality paradox, because in the gaming industry “salaries are very high and more men aim for those salary levels”; so, although equality in Sweden is wider, stats still demonstrate that at higher level there isn’t a positive situation.”

Furthermore, he added that diversity can trigger the changes that we would like to encounter and can help other women to rise in leadership roles and become models for others. He embodied with Swedish examples the words of the other three speakers and the need for women to build their confidence, to be empowered and inspire others with their presence, but also, to reach the opportunities they deserve.

In conclusion, the road for empowerment is long and arduous, but many attempts have been done and international strategic plans are trying to manage the challenge and reach efficient and satisfactory results. Women in STEM is still considered a too vague concept because of the stereotypes we are living with, but the good news is that the new generations are working hard to have a more gender balanced society, helped by policies and organisations. The harder the challenge, the bigger the satisfaction in reaching the goal.

Notes from on European Commission projects:

Girls Go Circular is an online learning programme for girls in secondary school focused on concrete challenges related to circular economy. Its goal is to encourage girls to use and gain digital and entrepreneurship skills, through a problem solving approach.

E-STEAM Fests is a 3 years programme focused on improving the girls and women digital and entrepreneurial competencies and will be done by this physical STEAM festivals with the aim to organize both physical events as well setup an online community and E-STEAM community both for girls and women. For the girls it will be focused on games, learning about robotics and coding with a fun atmosphere; for women it will be the same but more concrete skills like financial literacy. The project is about women supporting women, with the goal of stimulating mentorship and role models.

She then mentioned European Commission’s initiatives backed also by the Commissioner Mariya Gabriel, who is a big advocate for girls in STEM, showing how gender equality in ICT and STEM is a transversal priority for the EU. In particular she described the Gender Equality Plans in Horizon: since a couple of months, public bodies, research organizations and higher education institutions who want to have funding from or apply for funding from Horizon need to have a gender equality plan in their application or show that they have one in their institution. This initiative tackles the issue of women in STEM in a very systemic way. She then presented other initiatives. She then mentioned Women TechEU, #EUwomen4 future campaign and the EU Prize for Women innovators. 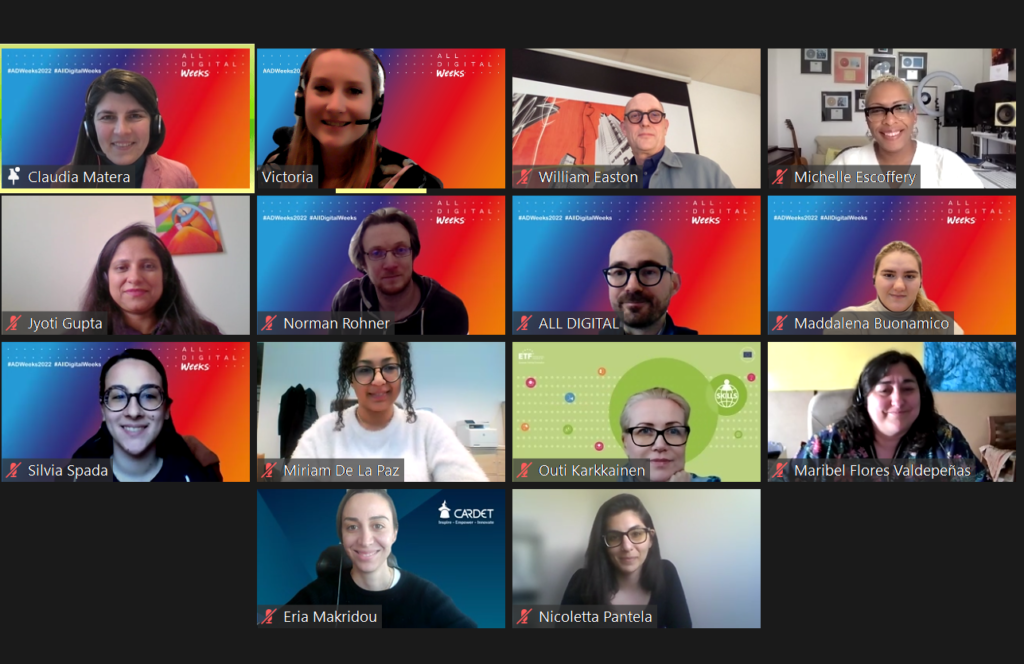