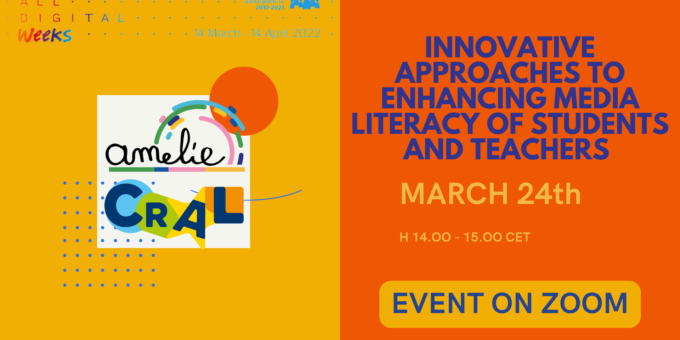 The last event of the second week of the ALL DIGITAL Weeks was held On March 24th, with the main objective of explaining two very important EU projects for students and teachers. In AMeLiE, teachers work with their students on online hate speech through activities on non-hostile communication, so students can learn how to analyse online messages and how to choose and promote alternative narratives in their everyday online communication. On the other hand, CrAL uses the language of cinema and moving images, with the same ultimate aim: by teaching students (and teachers) to reflect on how images represent the reality around them, and how they can be used to convey a certain message or point of view.

Peter Palvolgyi, ALL DIGITAL CEO, introduced the webinar about the project of Amelie and CrAL, and then introduced the ALL DIGITAL Weeks campaign.  He gave the floor to Gabriela Ruseva, ALL DIGITAL Policy Officer who gave a general look at what would have been the unfolding of the event presenting the speakers who took part in this webinar. 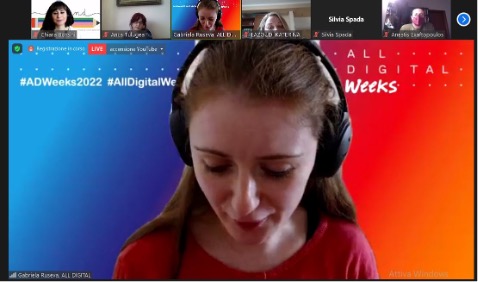 Chiara Borsini, from EGInA, presented the Project Amelie which defined an innovative methodology and approach to counter the phenomenon of online hate speech. So, the aim of the project is to provide training teachers and representatives of school with innovative practices to tackle the issue at stake, offering them an understanding of the project specific methodology. As a result of the development of AMeLie project we realised  training courses and the creation of a platform,  explained in detail during the presentation of Chiara Borsini. 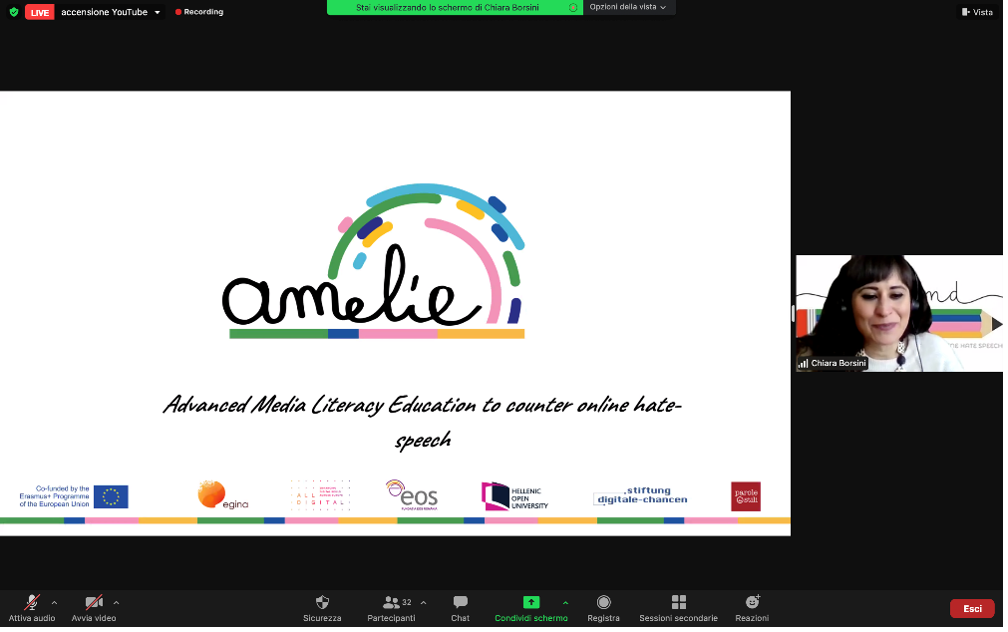 Continuing with the webinar, we moved on to the teachers’ testimonies who took part in the project, and then were able to deepen the topic of online hate speech with their students.

The first to speak was Katerina Lazoudi, Teacher at 2nd Lykeum of Xanth in Greece, stating that during her experience: “Our goal was to take on the concept of empathy, sympathy, through free dialogue, and group play. The students were concerned about the violence that exists in such a strong form in society and the anger that leads people to verbal violence and not only verbal violence. They realized that they could find themselves in position to be bullied or intimidated from other classmates, if they do not have empathy”. Students realized the importance of being able to put themselves in other’s shoes thanks to the program.

Immediately after, spoke Anestis Exaftopoulos also teacher at 2nd Lykeum of Xanth in Greece, who briefly told about what he was working on with his students: “We are trying to prepare some educational material, test it and then we will upload it from the platform, meeting the platform standards,.We made digital lesson with Learning Management System (LMS) so that we can have students enroll in this lesson, and so that they can cooperate and with each other”.

Another testimony of the work carried out in the classroom was brought by Corina Maliara, teacher of the experimental school of Isobel University Thessaloniki, who told how she and her students had been committed to meeting the project’s demands and the work to be done on it : “We watched the video as an introduction,  then we moved on to the PowerPoint presentation on the platform, related to the manifesto. It explains and exemplifies the principle of the manifesto. Lastly, the students formed groups, and worked on creating a product to promote one of the Manifesto’s principles”. 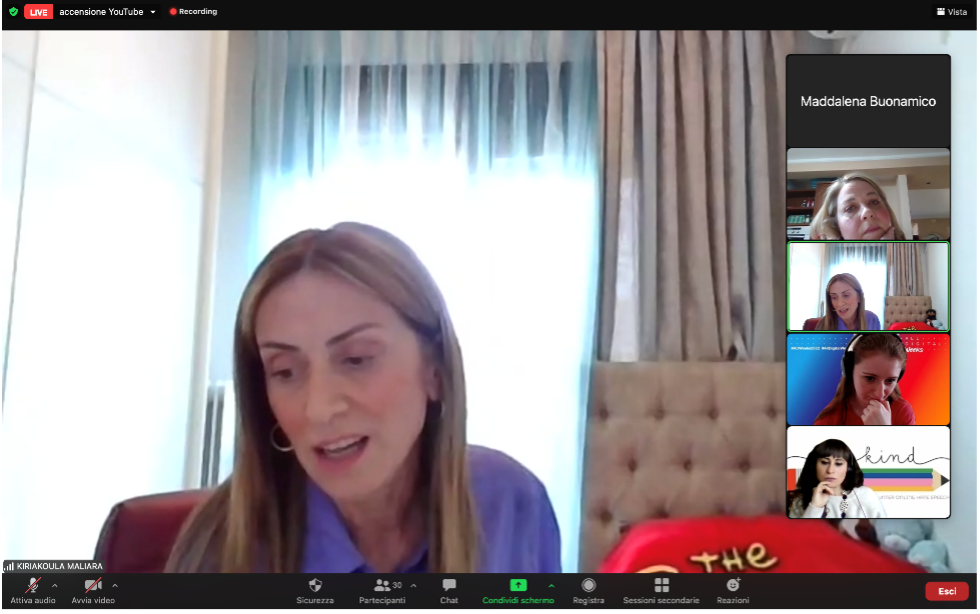 The last teacher to speak was Anca Tulugea, who confessed that she was a little sceptic about her students‘ reactions. Despite of what she expected, the students collaborated to create set of videos about the use of online words that can often hurt others. 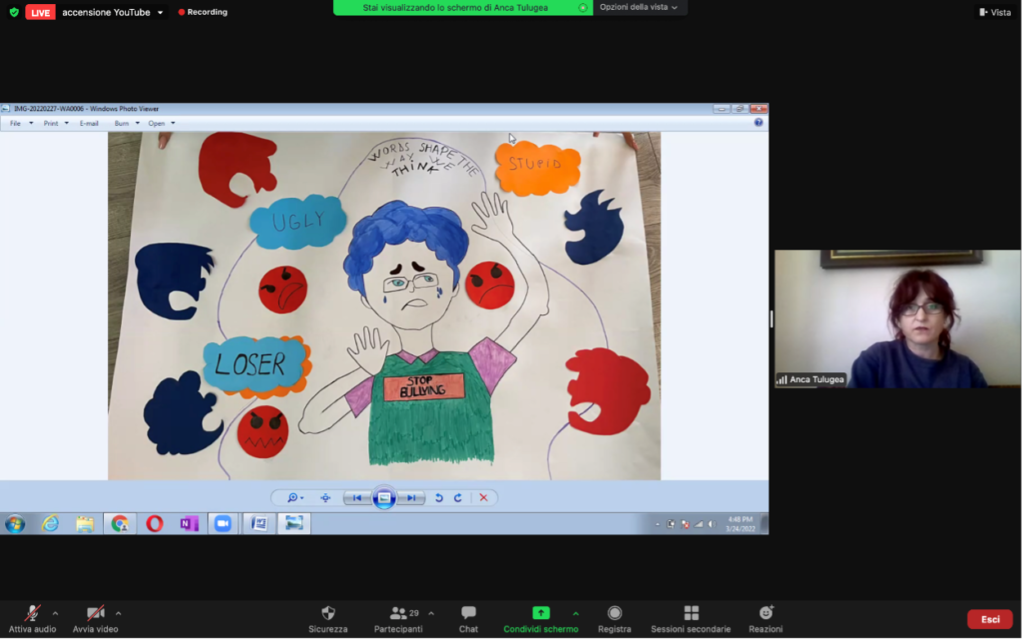 Gabriela Ruseva concluded the event by describing the creative audio visual labs, giving some basic information about the CrAL project. The main product of the project is the innovative educational methodology on  how to set up creative audio visual apps in schools. It is a project in which trainers and educators  from Croatia, Greece, Italy, Lithuania and Spain took part. 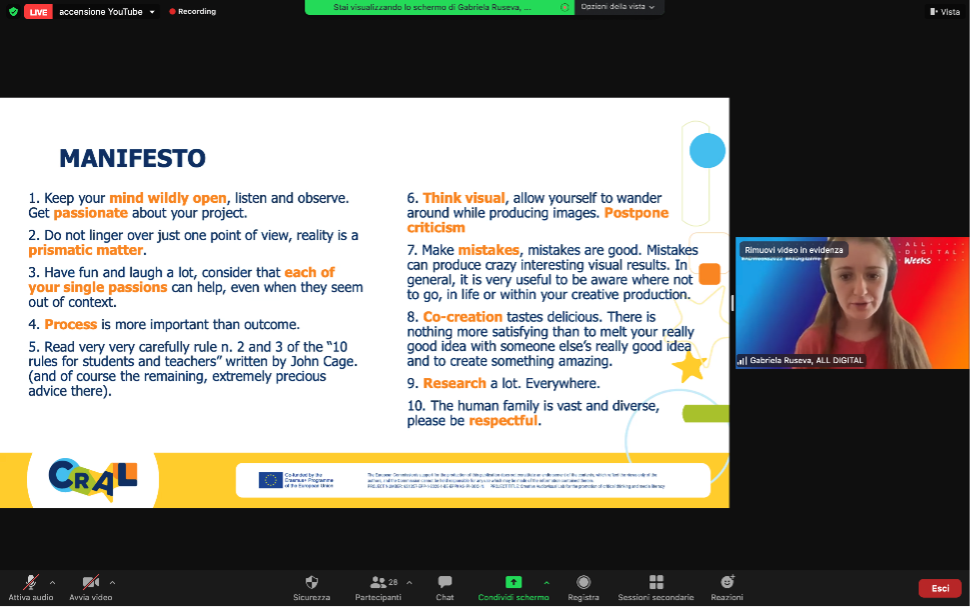