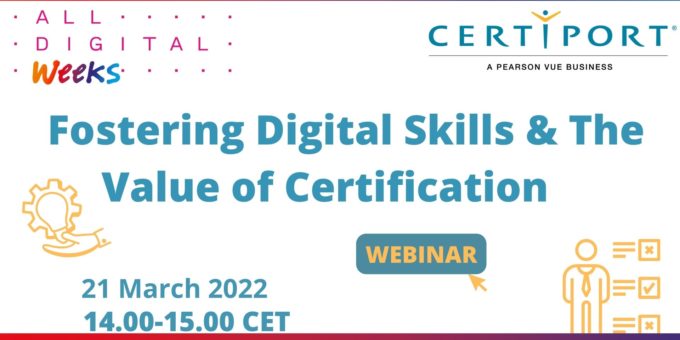 The Week 2 Launch event which took place on 21 March 2022 showcased what the Certiport partners and ALL DIGITAL members do together and provide information on the skilling solutions that can help all digital partners with their work. ALL DIGITAL CEO Peter Palvolgyi opened the event presenting the Week 2 of ALL DIGITAL Weeks 2022 campaign,  and its overarching topic “Fostering digital literacy and tackling this information”, and the launch event of the campaign entitled “Fostering digital skills and the value of certification”, kindly supported by Certiport. 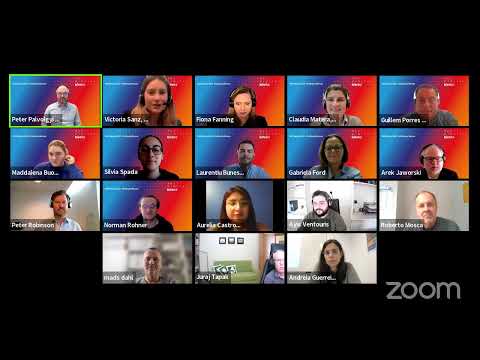 Gabriela Ruseva, ALL DIGITAL project officer, presented three projects on media literacy which were going to be covered during Week2. The first project ACTIon is about digital tools for active citizenship for young people. Less than 20% of the activities that young people do online related somehow to civic participation, which is a very little share of what they’re doing online.  So, the question is how to support them to use digital technology to really engage with democratic processes, to engage with public authorities, to express their opinion. The other 2 projects focus on media literacy for young people and students and teachers. AMeLiE project focuses on online hate speech and the way young people expresses themselves online, CrAL project on the other hand is aimed to increase the critical thinking of young people when they are using digital technology, to put them in the place of audio visual content creators. 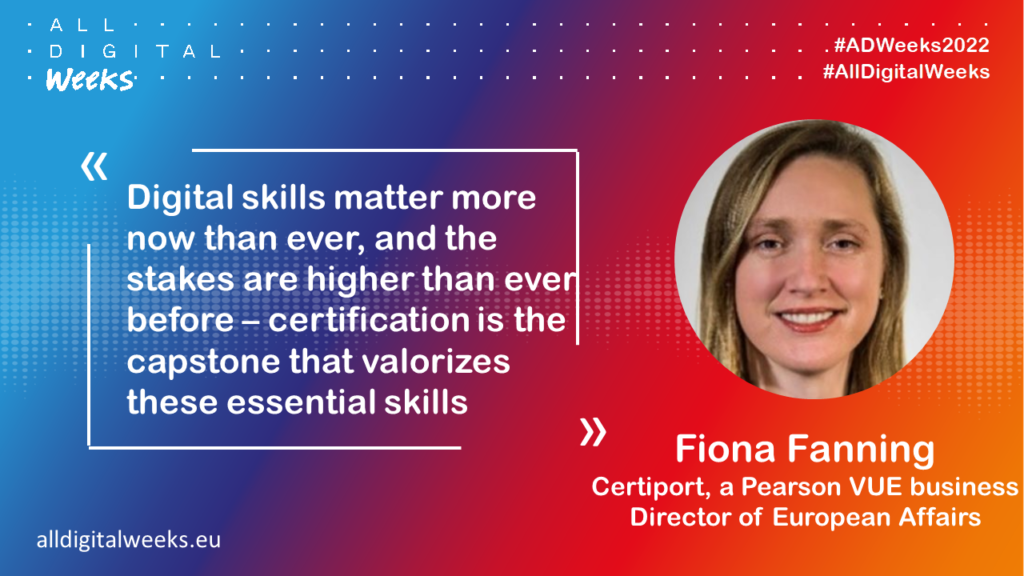 Fiona Fanning, Certiport, started her speech saying ‘’We would love to see a world where digital skills or the lack of them is not an obstacle any longer. We think the best way to do this is through individuals learning, validating the skills through certification.’’

Fiona mentioned two things particularly worthy of note: ‘’First, the pandemic showed that as schools shut down, and education moved online, digital skills essentially became a prerequisite for accessing education. Education, as we know, is a fundamental right and all of a sudden, we were in a situation where learners weren’t able to access that education, unless a couple of enabling factors were in place and digital skills were one of those. Besides, digital skills are essentially becoming a key element of democracy and access to information.’’ Her second message: ‘’the value of digital skills is accentuated and valorised by certification. Certification can live within the formal education system complementing existing academic programs with work ready skills; but for areas that the formal education system doesn’t address, certification provides that perfect complement that allows the skills gaps to be bridged. For example, for job seekers or employees it is first and foremost a validation of knowledge, but also provides increased marketability or employability. We know from research that one study shows that 91% of employers look for industry certification, in particular in the hiring process. Certification provides a really valuable return of investment.’’ 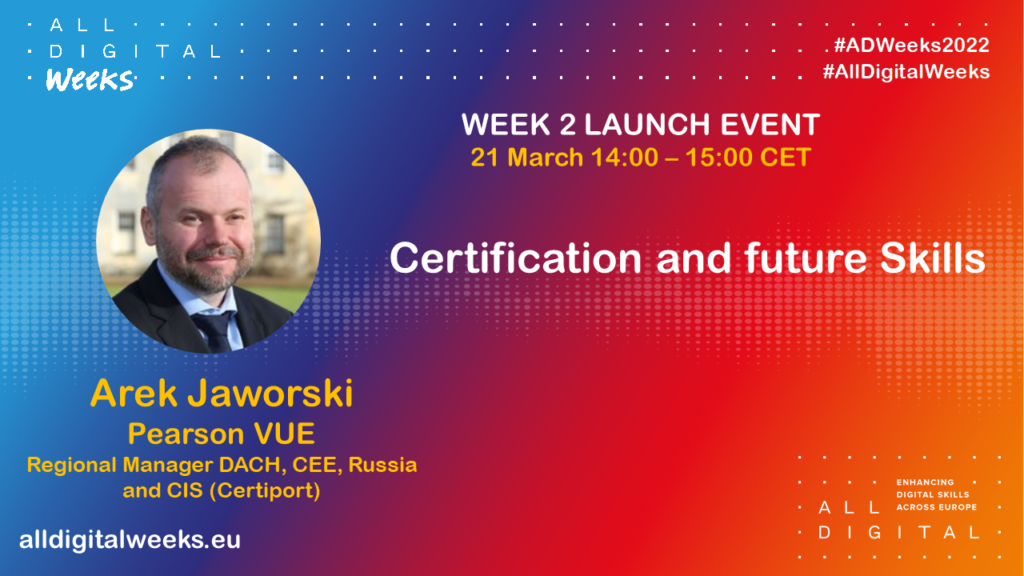 Arek Jaworski, Regional Education Manager at Pearson VUE , stressed that ‘’Pearson, I believe, is the largest educational organization in the world and our mission is to help people to bridge the skills gap through skilling and certification.’’ Arek then mentioned that ‘’the research done by the World Economic Forum in 2020, identified 7 clusters of different areas where most jobs in this new kind of digital economy will be created or the number of which will be growing. In all these jobs, certain digital skills are present even in the jobs based on the human factor. Digital literacy is present in every cluster. Basically, it’s a start for or it’s the foundational skills that everybody really should have for any job nowadays.’’ He presented Pearson programs, some developed together with leading IT organizations, such as Microsoft, Adobe, and some developed on their own, which are brand neutral. To the latter category belongs the IC3 digital literacy certification, the foundational digital literacy program, which not only focuses on the kind of technological side of digital literacy, but also on altogether seven different areas, such as digital citizenship, information management, content creation, communication, collaboration, safety, and security. This program is very closely aligned with DigComp, which is the European Union’s digital competence framework, and the UNESCO framework as well. Arek also presented an example of collaboration with Microsoft, introducing Microsoft Office Specialist program that can be considered as the digital literacy program and the Microsoft Certified educator which is a program for teachers, that helps them to use ICT in the classroom’’. 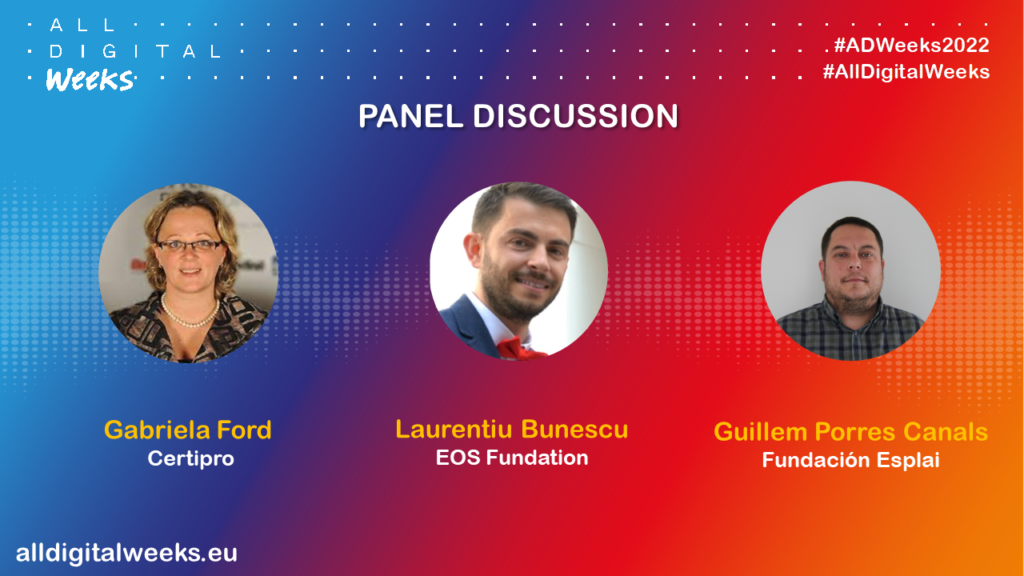 Then the speakers in the panel explained how their organisations integrate certification into the work they carry out. Gabriela Ford, Certipro, covered the Romanian case and stated ‘’On the digital index on human capital, Romania has been ranking really low over the past few years. So, you can just imagine the huge need for digital skilling, for digital inclusion, for certification and for anything related with raising the level of digital competencies of all categories and all target groups.’’ Besides, she added ‘’on the past seven years, I’ve been focusing also on certifications and how you actually measure the digital skills that people actually get, because there are lots of programs for SMEs in education, at universities and training programs are being delivered with European funding.’’ She concluder that from her experience in the training area ‘’the certification, blending in with all our training program, is proving a huge benefit because, first of all, it validates the skills but also it offers a huge differentiator on people’s CV.’’

Laurentiu Bunescu, EOS Fundatia (Romania), also provided the perspective of EOS Fundatia, training provider organisation at the national level and local level in Romania, on the reasons why the marriage between training and certification organisations works. He answered: ‘’I think first  of all is because we really need each other. The ALL DIGITAL manifesto prospects a sort of integrated approach towards education on digital competence. This starts from frameworks, such as DigComp, and goes to quality training, to validation of competencies and certification. At EOS Fundatia we don’t really have the capacity to cover all these areas. So, we rather focus on what’s most important for us, which is the training part. We feel we have been really benefiting from the work we do with a strong partner on certification such as Certipro, because the partnership opens new opportunities, allowing to offer this integrated education to our users increasing the impact on their professional and personal lives.’’ In a nutshell: ‘’Technology plays a role in everything today. The value of partnership is actually very visible, and the partnership is beneficial for both partners (offering training and certification)’’.

Guillem Porres, Technician of the Esplai foundation intoduced his organisation, an NGO founded in 1999, whose mission is to promote citizens empowerment and a commitment to improving society from the perspective of rights inclusion, and digital transformation with a special focus on youth. He then explained that ‘’as an organization in 2012, we joined forces with Microsoft and stared to carry out the training and certification process aimed at first at young people in vulnerable situations. Then, we provided to the general public. So far, we have directly and indirectly helped about 18,000 people to become certified here in Spain. So, at this point, for us, the value of certification has always been the value of improving the employability of the people who participate in our programs. We have been insisting for many years, that certification helps the active job research process. Besides, we are trying to explain the value of the certification and train other organizations, as NGOs, to become a Certification Centres in order to provide the vulnerable groups with the same opportunities that other people can have in their life. In other way we are democratising the certification and the right to be certificated, whatever is your social stage.’’

Fiona Fanning summarised as follow: ‘’There’s kind of two models emerging here. The first is really where we have the marriage, the partnership, where an organizations such EOS does the training, and then Certipro provides the certification – so where the two organisations work together in projects. Then there is a different model, like Foundacion Esplai, where it’s one organization that does both: the training and the certification provider.’’

During the second part of the panel discussion Fiona Fanning asked her guests to explain what the value of certification is when talking about funding programmes and dealing with donors.

Gabriela Ford underlined the importance of developing a project training in which a certification is already included, whether it is being done by different partners or by the same organization. As well she praised what Certiport is currently doing, by providing a full pathway offering a learning environment and trainings that would match the same learning objectives and the same certification objectives. She mentioned that Certipro and EOS ran together a joint training-certification experience to students on the Microsoft Cloud campaign across CEE and Europe. The campaign is really working well as in Romania EOS and Certipro shared the workload, and in actual fact they have worked so well together that they are now coordinating the Central and Eastern Europe campaign for Asia cloud promotion. She concluded with a positive note notwithstanding preoccupations in Europe on the European Digital Certificate. According to her, Certipro, and Certiport, obviously, is coming in into, with a lot of know-how in this area of certification and how you actually validate skills of people.

Then was the turn of Laurentiu Bunescu, who highlighted that the focus on employability is getting more and more important within the funding strategies not only for the European Commission but also for the industry partners, as well the connection between employability and certification, stating that the validation of skills and the certification have a very important role in today’s European work scene. He then talked about a concrete case:  EOS received a grant from Microsoft, with the aim of helping unemployed people that lack basic digital skill. His work at the EOS Foundation, starting from 2021 with the EOS Digital Academy platform, focused on offering a full range of assessment, tools, training, validation of skills and certification as well, with the precious help of Certipro on certification side to have an integrated approach from training to certification of skills. They have already had more than 5000 people going through the platform and the different services that EOS offers and proudly stated that Microsoft’s interest is to continue to work with them.

Lastly, Guillem Porres, explained the relevance of alliances and consortia and shared how their work at Foundacion Esplai matched with Certiport’s and EOS’s, with funding from the European Institute of Innovation and Technology (EIT), to bring the IC3 competency certification to nearly 500 girls all over Europe. Regarding another project, thanks to the Certiport remote examination system, they  could maintain the 3000 certifications that they have been doing every year, even during the pandemic.